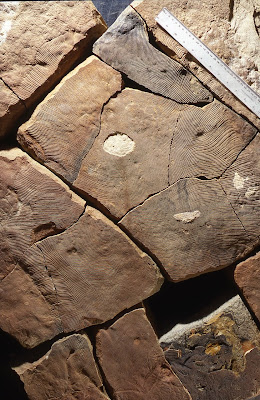 Dickinsonia rex - Prince of Worms
No. it's not a door mat, this is Dickinsonia rex. As it's name suggests, it is the biggest Dickinsonia species, and this is the biggest specimen ever to have been collected. Click on the image for a full sized version, but before you do, see the white ruler acting as a scale? That's a 12" (30cm) ruler! 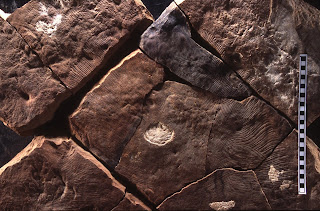 The image on the right is a close up of the top half, showing the mid-line gut, and the ornamentation along some of the segments to the right (again, click on the image for the full size version - I've cut the quality of both images as the original files are 3MB and 4MB). The scale is 30cm.

We found 'Dick' while checking out a pristine site. The specimen had eroded out of the low-dipping bedrock and had fragmented and slid down a gentle slope. I found the dark piece (towards the top right) as it was fossil side up (and hence weathered). Ediacaran fossils are usually on the underside on the bed, as the bed represents a mantling sand that covered the organisms and hence they imprinted onto the bed's lower surface. My colleague and Senior Researcher at the time, Richard, realised that - as this was a pristine site - the rest of 'Dick' was probably nearby. So we spent the rest of the day combing an area the size of a tennis court, looking for pieces.

We found most of what you see on the first day, but went back the next day an found a couple of other pieces. The missing piece was found, but the surface had weathered off - just like parts of the dark piece next to it at bottom right - and so we left it.

'Dick' is complete apart from the missing piece. The mess at the bottom is the tail that is folded back on itself.

What you can't see from the images is the thickness of the individual pieces. The bed is around 6" (15cm) thick.

'Dick' shows a number of features, such as a beaver-like tail (not shown well here), a central gut trace, possible elytra or plate-like scales on the segments, and evidence of muscles. But that's for another post.

'Dick' is currently on display at the South Australian Museum.
Posted by Chris Nedin at 9:46 AM