Grissom: Well? What do we have?
Catherine: The deceased is a 0 foot 1 inch arthropod of uncertain gender
G: Hmm. Time of Death?
C: That’s proving a little difficult.
G: OK. Do we know how long the body has been there?
C: Best estimate is five hundred and nineteen million years.
G: [raises eyebrow]So not much left then?
C: Actually quite a lot. The lab guys say it’s in a lager statten.
G: Ah, Lagerstätten. An old German mining term meaning “mother lode”. Used by palaeontologists to mean a deposit with exceptional preservation. So we’re in luck.
C: Yeah . . . right . 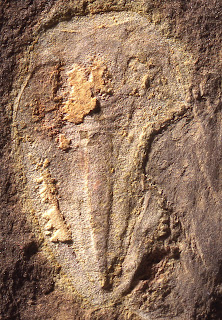 G: Do we have a cause of death?
C: Oh I think so. Death would appear the result of a large wound in the right side. A significant piece of the right side has been removed, and is missing.
No sign of a struggle at the site either, so it would appear that the attack took place elsewhere and the victim ended up here.
G: Got a name?
C: Naraoia? Possibly. Difficult to say at this stage.

G: Any suspects?
C: Well, we’ve liked Anomalocaris for this type of attack for a while now, but we’ve never been able to make a solid case.
G: Why? 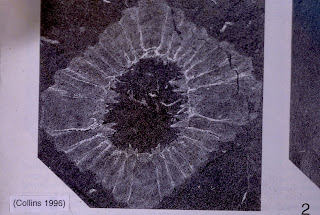 C: Well, despite the fact that Anomalocaris is pretty much the largest organism around, and it has jaws that could have made the bite marks we see in a number of victims, we know that the jaws probably didn’t come together very strongly. They didn’t . . . um . . . occlude. They didn’t occlude. Also the jaws themselves were not strongly mineralised.
G: [Begins to speak] Scl . .
C: [interrupting, rolling her eyes] Sclerotised, they were poorly sclerotised. And so couldn’t bite into strongly mineralised or sclerotised attire.

G: OK. Lets review the evidence.
C: Well we have a naraoid with a large wound on the right side.
G: Anything else?
C:Well, there’s some minor damage of the opposite side to the large wound, but we can’t tell if that was caused at the same time as the major attack or if it is unrelated. Anomalocaris is a suspect, but doesn’t appear to have been able to inflict the damage we see.

G: Whatever caused the wound also cut through the cuticle. What does that tell us?
C: Well, first we need to know about the properties of the cuticle. Arthropod cuticle has a bilayered construction, consisting primarily of a thin, usually mineralised, outer exocuticle, underlain by a thicker, unmineralised, endocuticle. Each of these brings differing mechanical properties, with the hardened exocuticle strong (and thus resistive to cracking) under compression (or being poked), but weak (and vulnerable to cracking) under tensional forces (or being stretched). By comparison, the softer, more pliant endocuticle is the opposite, weak under compression, but strong under tension. These properties combine to provide a greater level of protection against mechanical attack than either layer could alone.
By varying the thickness and mineralization of the two layers, arthropods can produce a wide range of exoskeleton types, from highly plastic to highly rigid.

G: I’m impressed
C: Yeah, well, you have so many arthropods crawling around your office that I though I should read up on them.

G: And what does that mean for the properties of the cuticle under pressure?
C: Well, Highly plastic cuticle can deform almost to breaking point and rebound back to its original shape when the pressure is released, kind of like pushing your fingers into a balloon and then letting go.
G: Elastic deformation.
C: Right. While highly rigid cuticle will show almost no deformation until the moment it breaks, kind of like pushing down on a dinner plate.
G: Remind me never to invite you around for dinner.
C: Cute. But most cuticle is a compromise between highly elastic and highly rigid.
G: So?
C: That means under low pressure, the cuticle shows plastic deformation, which will rebound if the pressure is released. But, at a certain level of pressure, the cuticle reaction changes.
G: The yield point.
C: Right. If the pressure exceeds that level, any deformation is permanent, like pushing your fingers into plasticine.
G: And if the pressure continues to increase?
C: Eventually the cuticle will fail

G: [Grissom’s phone rings. He puts it on speaker.] Warrick. Right on time. What did you find? 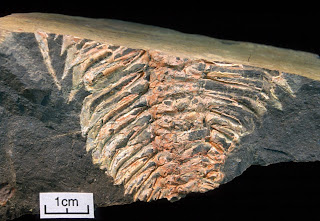 W: Grissom. As you asked, I looked at all the cases that had with a similar MO to the one you have there.
G: And?
W: You were right. In a significant number of instances, the victims had damage on the opposite side to the major injury.
I’m sending through a couple of photos. The first is from the same location but the victim was a Redlichia. The second is from Canada and shows a similar MO, but in this case the victim was Ogygopsis.. 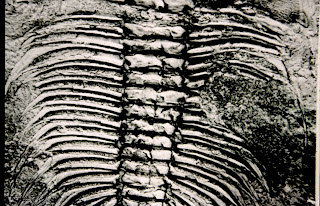 I’ve also got an example from the Ordovician, where the attacker was identified as a nautiloid.
G: As yes, the first example of our squid overlords exercising their might.
W, C: What?
G: Oh nothing, just a blog I read. Thank you Warrick. [Hangs up]
C: Nautiloid? There are no nautiloids at this location. How does that help us.
G; It’s all evidence. And we know the MO of nautiloids, they wrap their tentacles around the body of the pray and force it into the mouth, where the strong beak bites down.
C: But we have already established that that MO wouldn’t work with Anomalocaris because of the poorly sclerotised jaws.
G: Correct. Now with that, and the nautiloid MO in mind, lets re-examine the victim.
C: OK. Well the pressure exerted on the right side was clearly enough to break the cuticle.
G: Agreed. Anything else?
C: Umm . . . wait a minute, the damage to the left side! It’s permanently deformed
G: So?
C: Since it occurs in a number of cases it probably occurred at the same time as the major damage. That means it’s has significant pressure applied to it, enough to exceed the yield point. Maybe the attacker had two goes at the victim?
G: Possible, but I don’t think so. The margin is pinched in. it doesn’t look like a bite mark.
C: Well if the damage was done by an appendage, where is the second site of damage? Anomalocaris has two appendages.
G: Take a close look at the Pposterior shield. See along the margin?
C: It’s thicker! The cuticle folds back on itself. It would have been much stronger than the anterior shield margin.
G: Correct. Also the posterior shield tapers quite markedly, so the best purchase would have been on the anterior shield. 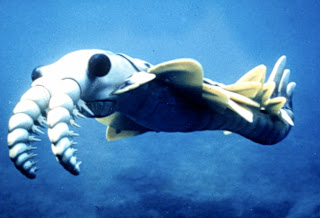 G: What do we know about the cuticle that can help us here?
C: Well, we know that the two-layered construction is best able to withstand the stresses associated with the downward force that normal biting would produce.
Wait a minute. What if it were possible to reverse this?
G: What do you mean?
C: Well, the cuticle is set up to withstand a compressive force on the upper layer, which translates to an extensive force on the lower layer as it stretches around the point of impact.
What if this were reversed, and the extensive force were applied to the upper layer?
G: Interesting idea, but how would you do that?
C: We know that the appendages were doing something that provided enough force to damage the side opposite the major wound. Maybe it was flexing the victim back and forth, using the jaws as a pivot point.
G: Like you would do to break a credit card?
C: Exactly. You can’t break a credit card with your hands, but you can force it to crack by flexing it back and forth.
G: I think you may have something here. So what is your description of the events leading to the crime?
C: The victim is attacked from the right hand side by Anomalocaris, which grabs the victim on the left side of the body and feeds to right side into the jaws. It then flexes the victim back and forth, inducing a weakness, which eventually caused the cuticle to crack.
G: I think you’ve cracked the case!
[fade out]

Epilogue
[Grissom walks past Catherine’s office where she is sitting at her desk with her head in her hands]
G: Catherine?
C: I’ve just had a call from some lawyer at the Discovery Institute. They are challenging our findings on Anomalocaris.
G: On what grounds?
C: They say that, as the arthropod cuticle is so complex and perfectly suited to its purpose, it had to be designed. And, since we cannot know the mind of the Designer, He could have made that particular cuticle act that way.
G: He?
C: Yeah, I noticed that. Anyhow, they also said that our dogmatic commitment to the materialist world view was closing our mind to other possibilities and was prejudicing the case against Anomalocaris.
G: What did you say?
C: I told them that they could shove their religious, anti-science claptrap right up their[bum bum - bum - bum bum. Whooooo are you? - Who? Who? - Who? Who?]