The wingnut Virginian Attorney General Ken Cuccinelli has had a setback in his witchhunt of Professor Michael Mann. Cuccinelli was asking for all documents from the University of Virginia concerning professor Mann's research while at UVa, to "investigate" any possible fraud committed by Professor Mann in his grants received to study climate change. A judge has ruled that Cuccinelli failed to show a sufficient “reason to believe” that UVa possessed any documents related to Mann that suggested a fraud occurred. Cuccinelli will continue harrassing UVa and Mann on the taxpayer's dime.

Cuccinelli is a climate change denier, who has also directed all state schools and colleges to remove sexual orientation references from their non-discrimination policies (in other words removed discrimination protection for gays and lesbians), and sued over the constitutionality of federal health care reform. All on the taxpayer's dime.

Cuccinelli is doing nothing more that using taxpayer money to fund a major profile enlargement, which is odd given his opposition to publicly funded healthcare.
Posted by Chris Nedin at 6:04 PM 0 comments

Evolution Among the Trilobites Part 1

The last Palaeoporn featured the growth stages of meraspid, or juvenile, Estaingia. This post will use those meraspids and a bunch of holaspids, or adults, to measure the growth patterns of Estaingia, or it’s ontogeny.

If you want to look at evolutionary relationships between species there is one, and only one rule.

Studies of ontology requires the measurement of various features to show how they change with time or size (usually the two are interchangeable – in trilobites anyway). The changes in one feature are then compared with changes in another.

At right is the head of an average trilobite showing which bits are which. This post will be concerned only with the head and what happens to it during ontogeny. Actually its even more restricted than just the head. We'll only be looking at the cranidium. That's the central area including the bulbous glabella. Why? well we need to take a bunch of measurements over a range of specimens to build up a picture of the changes that occur during ontogeny. The trouble with the librigene or free cheeks is that they are, well . . . free, and tend to be lost (as pointed out in Palaeoporn 14 and 16). The cranidium is usually left behind and so is a better subject for measurements. 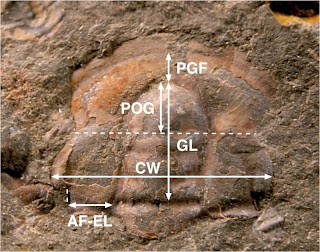 At right is a cranidium of an Estaingia. The relevant measurements that we are interested in are marked. CW is cranidial width, which is literally the distance between the eyes. PGF is Pre-Glabella Field which is the area in front of the large bulbous glabella. (Incidentally the pre-glabella field only runs to the shallow trench towards the front of the cranidium. In front of the trench is the doublure. That is folded underneath the cranidium in life, along the trench, and pops up during moulting (see Palaeoporn 16). GL is the glabella length. Adding PGF and GL gives us a value for the length of the craniduum. POG is Pre-Orbital Glabella which is the bit of the glabella that lies in front of a line drawn between the front tip of the eyes. AF-EL is the distance between the end of the Axial Furrow (the trench behind the glabella and the back tip of the Eye Lobe.

Isometric growth can be very useful in confirming that specimens belong to a particular species. In the examples above, the red dots represent meraspid Estaingia and the blue dots holaspid, or adult forms. The fact that they all line up on a straight line is supporting evidence that the meraspids do belong to Estaingia. This is important because species are defined by a “type” specimen which is normally an adult, and so it can be quite difficult to place meraspids in the correct species if the growth patterns vary considerably from the adult.

Oh yes, the black dots at the far end of both graph trends represents a holaspid Estaingia from a different location and a slightly younger deposit, at Cymbric Vale in New South Wales (NSW Estaingia). Thought to be the same species as E. bilobata discussed here from the Emu Bay Shale, but also though not to be for a couple of reasons. It'll feature later but see how it plots along the same trend as the other specimens? good evidence that it is E. bilobata, but I'm getting ahead of myself.

Frankly, however, isometric growth while it has it’s place, is a bit boring. Meraspid 1 looks pretty much like the adult form. (no problem in putting the meraspids in the correct species there then.) 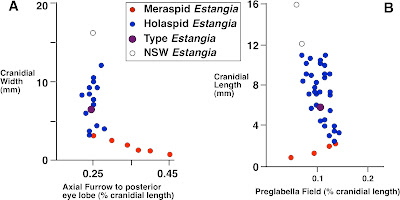 Holy rotating vectors Batman!
Now it gets interesting. There is only so much you can do with straight lines. Everything is better with curves! Anisometric growth changes are not random. They don’t occur because the merasid didn’t like the look of itself in the mirror. The represent hereditary traits. In the two graphs above, A shows Cranidial Width against Axial Furrow to posterior of Eye Lobe (as a percentage of cranidial lenght) (CW/AF-EL) and B shows Cranidial Length against Pre-Glabella Field (as a percentage of cranidial length) (PGF/GL+PGF).

Here the difference in growth patterns between the merasipd and holaspids is marked. This is telling us important information about how the final look of the holaspid form is achieved, and what pattern of growth occurred.

In graph A the feature being measured is the curvature of the eye. In early meraspids, the eye curvature is quite shallow and so the lower end of the eye is a significant distance from the Axial Furrow. As the meraspid grows, the eye curvature becomes more pronounced and the distance between the lower end of the eye and the axial furrow decreases. At the end of the meraspid stage, the distance (as a percentage of cranidial length) is around 0.25. In the holaspid stage this trend ceases, the eye reaches its maximum curvature, and doesn't change again, so the value remains at around 0.25. The NSW Estaingia plots along this holaspid trend albeit at a larger size that those at Emu Bay, but again, it is good evidence that NSW Estaingia is Estaingia bilobata.

One last graph which shows the preorbital glabella or POG (the portion of the glabella in front of the eyes). 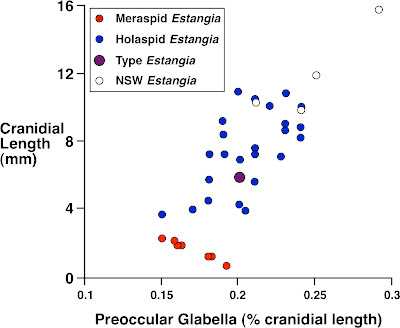 Note that this is a mirror of the pregalbella field plot, and provides an explanation for the pregalbella field changes. The preorbital glabella in the meraspids decreases in size relative to cranidial length. In other words, as the cranidium increases in size, the preorbital glabella is increasing at a slower rate. This means that the area in front of it has to increase in size. So the increase in the pregalbella field we saw in the previous chart is a result of the preoccular glabella not keeping up during meraspid growth. However, in the holaspid stage, this trend is reversed and the preoccular glabella starts to grow at a more rapid pace than the cranidium generally, and begins to represent more and more of the total cranidial length. Thus the preglabella field begins to decrease as a proportion of the total cranidial length. Once again the NSW Estaingia plot among the Estaingia bilobata and along the trend. We can say with some confidence then that NSW Estaingia is a larger version of Estaingia bilobata.

Next time how these growth plots can provide information on evolutionary relationships.
Posted by Chris Nedin at 3:22 PM 2 comments 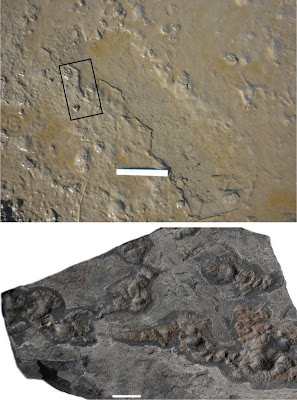 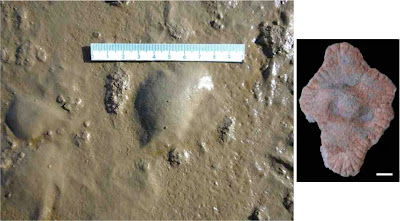 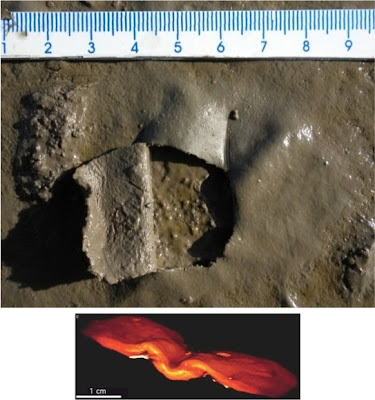 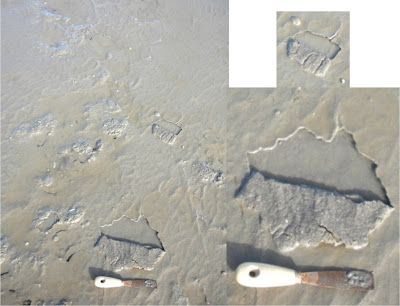 This latest evidence strengthens the argument that the 2.1 Ga structures are pyritised microbial mats and not multicellular colonial organisms.
Posted by Chris Nedin at 12:05 PM 2 comments