He wrote two movies Kelly's Heros and The Italian Job (the proper one with Michael Cane, not the pale imitation). But for me he is best remembered as the writer of the ground-breaking 1985 BBC TV drama Edge of Darkness. Also known for it's music score co-written and played by Eric Clapton (see below), Edge of Darkness marked the beginning of real political drama on the BBC.

If you've never seen it, do yourself a favour, get a copy, shut the curtains, turn off the phone and settle down for 5 hours of the best TV drama you are ever likely to see. 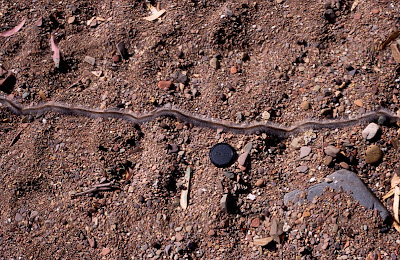 Geologists always walk around looking at the ground because that's where the rocks are. Especially in a creek bed in the middle of a gorge in the Flinders Ranges. Occasionally you see something else of interest.

This group boldly heading out along the floor of the gorge took me by surprise because, although there are several species of butterflies and moths native to the Flinders, I'd never seen caterpillars there before (click on the image to enlarge). The ripples in the creek bed can clearly be seen, and the trail of caterpillars almost mimics the rise and fall of the ripples. The lens cap is 52mm in diameter
Posted by Chris Nedin at 10:01 PM 2 comments