In the ongoing Adaptationist v. Pluralist debate, both sides agree on a surprising amount. Both sides agree that there is more to evolution than adaptation by natural selection. However, Adaptationist would argue that adaptation by natural selection is the most important, or even the overwhelming, evolutionary process, and that evolution can be described as climbing Mt. Improbable – with adaptation to environment similar to climbing a fitness landscape peak towards optimal fitness (but please note, never, ever, reaching the top!)

I disagree. I think genetic drift accounts for most of the evolution that occurs, and natural selection, while very important – especially in creating diversity – accounts for a smaller percentage. However, both have worked together to produce the diversity of life on Earth.

I also have a problem with the Mt Improbable analogy . . . well, actually I have two problems.

1) It perpetuates the idea that evolution is an upward striving process, and that derived or adapted groups are higher, than the less derived or less adapted and, as a consequence, fitter, advanced . . .better. (the old Tree of Life analogy problem.)

OK, maybe it is applicable to a fitness landscape, but there is no reason that the landscape has to have the peaks pointing upwards, . . . is there? Surely it's the distance between where you are on the peak and the schmucks on the fitness plane that is important, not the direction of that distance?

Plus, fitness landscapes, are not permanent, or even solid. They change with the environment. A population/species, or whatever, may be quite "high" (see how hard it is to use neutral language)on a fitness peak one minute, and find itself down on the plane, or even in a fitness trough, with hardly any change in allele frequency, but a significant change in environment. In other words the fitness landscape moved underneath it.

2) The real problem with the Mt Improbable analogy though, is that it gives the impression that as hard as it is to ‘climb up’ (and it is), the analogy suggests that it is relatively easier to ‘climb down’ - and it isn’t because its actually harder. OK that might be pushing the analogy a bit far – but that’s the point, it doesn’t hold up to detailed scrutiny.

The real problem is that adaptation, in the broader picture, is an evolutionary cul-de-sac.

Adaptation means that certain alleles are being selected for because they confer an advantage in a particular environment. If the environment changes, then the alleles that conferred an advantage may no longer do so. Worse, the very process of selecting for certain alleles may well have stopped other alleles getting fixed through drift – alleles which might be beneficial in the new environment. Even worse, the alleles that were originally selected for may be costly to produce and maintain where they confer no advantage, and thus be deleterious.

But the really bad thing is that, as hard as it is to gain the alleles that provided an advantage, it is even harder to loose them, as this would require specific mutations to affect those particular alleles (rather than the random process that produced them). You could reduce them to a vestigial level, provided you survived long enough to do so. Difficult though, if you are struggling to survive in a new environment where the competition does not have the adaptive dead weight (unless you have some other advantage.)

The more adapted a group becomes, the more imbedded it is in a particular environment, and the more sensitive it is to changes to that environment.

Eventually all strategies lead to extinction, but during environmental change, it’s the generalists that survive, not the specialists. Adaptation generally leads to extinction. Highly adapted groups/species and ecosystems delicately balanced on a web of interconnected adaptations, will crash once environments change. 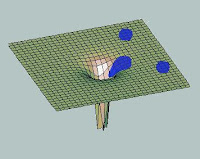 Adaptation is not climbing up Mt Improbable, it’s climbing down Pit Improbable! The pits are hard to find, but once in, it’s easier to go down than it is to back out, and if you adapt too far, you are trapped in a cul-de-sac with no way out when the environment changes. The generalists that flirt with the rim of the pit, or on the fitness plane have a better chance of surviving to become the stem stock for new adaptations.

But for most populations/species, adaptation is a pit of no return.


UPDATE
There are two discussions here and here, and a new blog post here.
Posted by Chris Nedin at 10:45 AM