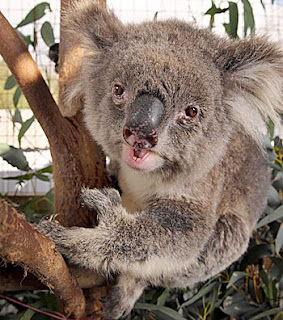 Sam the koala, who became famous after the Victorian bushfires for taking a drink from a water bottle of firefighter David Tree, is recuperating well.

Taken to the Southern Ash Wildlife Centre with burns and dehydration, Sam was one of 100 koalas taken in by the Centre. There are now only a few dozen left, including Sam, who has an eye infection, but is expected to be fit enough to be release soon.

Sales of a photo of Sam taking a drink from the water bottle has raised around A$510,000. A$500,000 will go to firefighters who lost their homes in the bushfire, the rest will go to the Centre, to develop a specialist burns unit to treat future burns victims. 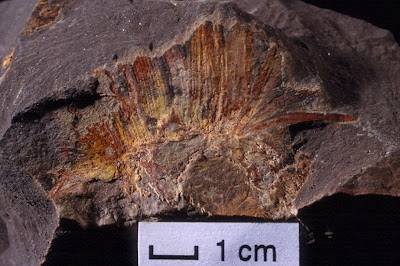 Look up there! Is it a brachiopod? Is it an annelid? Is it a mollusc?

This is a wiwaxiid from the Emu Bay Shale. Unfortunately undescribed, but closely linked to Wiwaxia and the halkieriids. It would be one of the oldest examples of a wiwaxiid, as the others are from the Middle Cambrian Burgess Shale and comparable deposits. 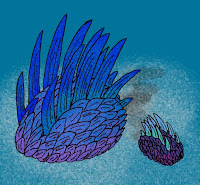 The beast was bilaterally symmetrical, oval in shape, and covered with short scales - called sclerites. Also present were a number of rows of larger spines which protruded upwards in a probable defensive array (see reconstruction at right)

Wiwaxiids had a flat foot-like underside. Little is known of the internal anatomy. 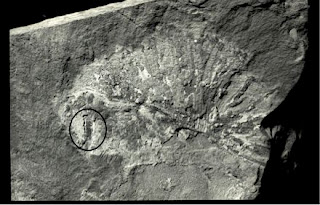 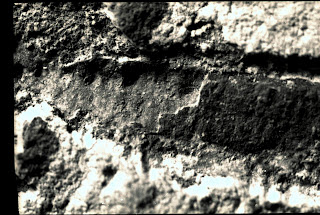 One feature found in wiwaxiids is a radula-like feeding bar. So I looked to see if my specimens had a radula-like feeding bar. I've switched to black and white photos for higher resolution. A bar structure, formed of calcium phosphate, was found towards the front of the specimen. After preparing out (lower image) half the bar remained and the other half (the distal, or outer, part of the bar is removed, leaving a mold of the lower surface of the bar. in this mold can be seen several depressions along the 'upper' margin, represented by shadow (the light is coming from the top right of the image). These are 'teeth' which would have protruded from the lower margin of the bar (the bar is approx. 5 mm long.)

Now you see it, now you don't

There are a few differences between the marsupial and placental skulls, however the easiest by far is the nasolacrimal duct - that's the tear duct to you and me. 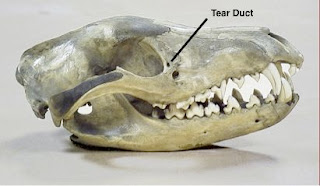 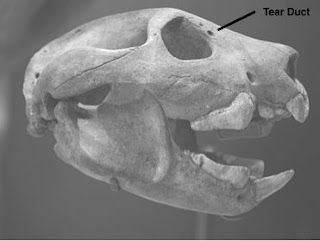 Above are the skulls of a Thylacoleo (left) and a Thylacene (right). The tear duct is clearly visible outside of the eye socket, sitting on the cheek. 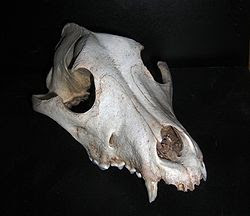 Now the skull on the right is a dog skull. See the tear duct?

So the next time you have to make a life or death identification, you can spot the marsupial with confidence.
Posted by Chris Nedin at 10:00 PM 7 comments 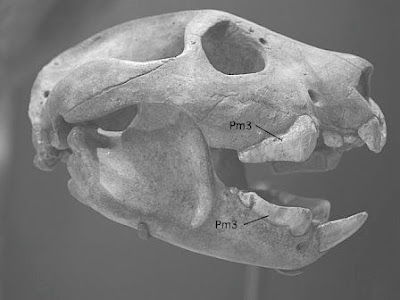 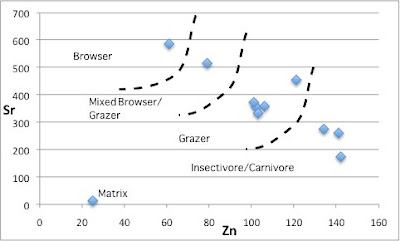 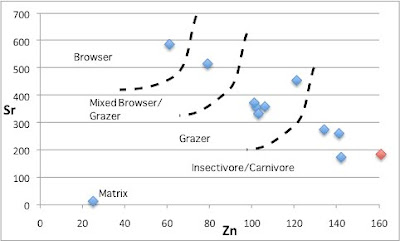 A Rave of Locusts

Your average locust is actually solitary beast who will actually shun other locusts. So the question is, why does a solitary animal suddenly turn gregarious with such a vengeance that it turns into a super organism that causes huge devastation?

A recent Catalyst program looked at the work done on this by a joint Cambridge and Sydney team. It appears that if the hairs on the back legs are stimulated (through contact with other locust - or a paint brush in this instance) for several hours, the locust turns from a loner to gregarious.

This short time frame meant that the cause of the the change had to be chemical, and not through a re-wiring of the nervous system.

When they studied gregarious locust they found that they has elevated levels of serotonin.

But there's something else going on. The swarming doesn't happen until there is a critical mass of locust. Then they all start moving in the same direction.

So strong is the urge to move together, that any that do not are set upon and eaten by the others.

So it looks like locusts invented the rave party long before humans.

Now that the chemical that triggers the gregarious behaviour has been found, a solution presents itself.

The only trouble is, how do you persuade several million drugged-out locusts to drink a glass of warm milk and have a good lie down?

I don't know where this came from, so I can't credit it, but it's bloody funny! 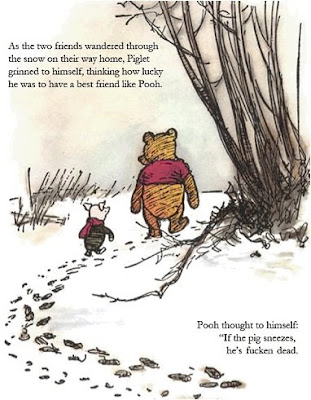