I don’t know! You wait ages for a new Anomalocarid, then two come by in close succession! First Schinderhannes bartelsi and now Hurdia.

Where to start! When I first saw it, I thought is was an Anomalocarid caught in flagrante delicto with a phyllocarid!

This is a bit of déjà vu, as with the original identification of Anomalocaris from the Burgess Shale, here’s another case of a number of isolated fragments being found previously (mouthparts, frontal appendages, body, and those weird frontal carapaces - a total of 8 Cambrian taxa) and given separate names, now being brought together into one complete specimen – just like the original Anomalocaris.

While the body, eyes and great appendages are similar to other Anomalocarids, the major difference here is the strange, and very large, carapace or shield-like structure on the head.

It is unlike any other Anomalocarid, with the possible exception of S. bartelsi which has a structure at the back of the head, which may be a funky posterior-flaring carapace-like structure (although that structure could be a pair of trunk appendages). 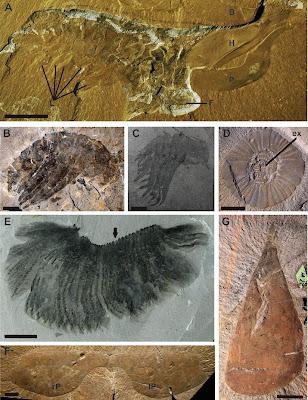 Fig. 2. Paratype specimen and isolated components of H. victoria. (A) ROM 49930, paratype, lateral view showing lateral flaps. (B) ROM 59258, frontal appendage morph A. (C) ROM 59259, frontal appendage morph B. (D) ROM 59260, mouthpart with extra teeth rows. (E) ROM 59261, lanceolate gill blades showing attachment at one end (arrow). (F) ROM 59262, paired P-elements. (G) USNM 57718, holotype of H. victoria. Scale bars, 1 cm. Abbreviations are as in Fig. 1. B, Banffia; ex, extra teeth rows.
Firstly the head. This is by far the most bizarre Anomalocarid, by virtue of the head, which is the first Anomalocarid identified with a carapace. At almost 50% of the length of the animal, it's huge, and made of two different "elements", a single “H” element and a paired “P” element. There doesn’t appear to be anything below this carapace, so it’s function is something of a mystery.

Why on earth is it there?!

Sexual selection maybe?
There are certainly examples of other arthropods that have an exaggerated body part used to attract a mate – think of the fiddler crab, but all seven fully articulated (with all the bits in the right place) specimens show this remarkable carapace, and it’s unlikely that all seven would be all one sex (if the structure was confined to one sex). Although it would be interesting to see if the size of the carapaces shows any bimodal distribution which may indicate a size differential, possibly based on sex. But as arthropods generally keep growing, maybe there are two sets of growth trends.

Prey capture maybe?
Perhaps Hurdia trapped small prey below the carapace and then advanced so that the appendages could grasp the prey. Or maybe it was used to dig into soft sediment after prey. Or perhaps it contained sensing apparatus to detect prey in the sediment

The rest of the beast conforms pretty much to the standard Anomalocarid body plan, including the circular jaws. This time, however, there are more teeth just for added effect.

Hurdia does have a fine set of gills though. And they appear to be free hanging gill structures, and similar to crustacean and chelicerate gill structures, rather than the modern arthropod biramous limb (where the leg and the gill are part of the same structure). This is interesting because it is thought that the Cambrian arthropod biramous limb formed by the fusion of a uniramous leg (just the leg) and a respiratory exite (gill), whereas the modern biramous limb is formed by a split of the main axis of the limb. The presence of separate filamentous gills in Cambrian Anomalocarids pushes the structure below the crown group arthropods and into the stem group arthropods, supporting the fusion theory. 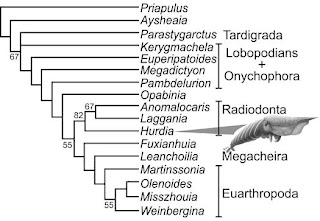 An analysis groups Hurdia along with Anomalocaris and Laggania as a sister group, outside of the Euarthropods, or crown group arthropods.