New Energy Secretary is a Steve

President-elect Obama has announce his Energy Secretary will be physicist Steven Chu. Professor Chu is, apart from Professor of Physics at Stanford, and a Nobel laureate, a member of Project Steve. This is a list of scientists names Steve (or Stephanie, or Stephan, etc.) who accept that:

Evolution is a vital, well-supported, unifying principle of the biological sciences, and the scientific evidence is overwhelmingly in favor of the idea that all living things share a common ancestry. Although there are legitimate debates about the patterns and processes of evolution, there is no serious scientific doubt that evolution occurred or that natural selection is a major mechanism in its occurrence. It is scientifically inappropriate and pedagogically irresponsible for creationist pseudoscience, including but not limited to "intelligent design," to be introduced into the science curricula of our nation's public schools.

The Project is run by the NSCE as a parody of the creationist tactic of compiling lists of "scientists" (most of whom have no connection to biology or evolution) that 'dissent from evolution'. In response the NSCE created Project Steve in honour of Steven J. Gould. 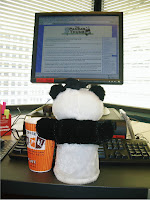 Are you a Steve (or Stephanie, or Stephan, etc.)?
Are you a scientist?
Do you agree with the statement above?
Then go to Project Steve and sign up.

And while you are at it, sign up to NSCE. They do great work.
Posted by Chris Nedin at 5:30 PM