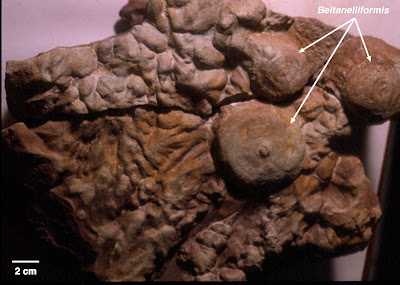 In keeping with the positive hyporeliefian, is-it-or-isn't-it-a-metazoan theme of the last couple of posts, here is Beltanelliformis brunsae. A widespread form (this one is from the Mackenzie Mountains of Canada) that has had a history of being moved around the tree of life.

Notice firstly the texture of the surface. This is a microbial mat that has undergone some considerable deformation, probably due to the sudden influx of sand which pressed down on the mat and caused it react unevenly to the sudden load.

The Beltanelliformis appear at first glance to be similar to other disc-like Ediacaran forms associated with holdfasts. However, notice that the specimens pictures are in strong positive hyporelief, that is they extend quite some way out from the lower surface of the sandstone. This means that the sand infilled quite a sizable hole in the underlying mud. Notice also that, in the top two specimens, the fossil has a 'collar' around the basal disc, which makes the hole infilled by the sand cone-shaped, with the base being the smaller diameter part of the cone.

This configuration let to suggestions that the form represents the burrow of an anemone.

Below is a representation of that interpretation (from Schopf et al.). 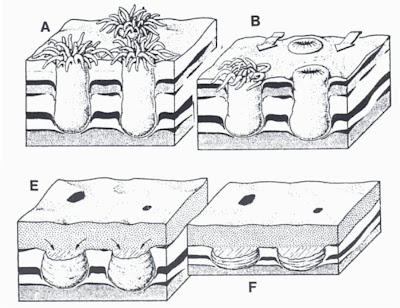 However, more recent interpretations have Beltanelliformis as an algae.

The uppermost Doushantuo Formation (590-555 Ma) at Miaohe in the Yangtze Gorges area, is a series of dolomites that provide a rare Burgess-Shale-type taphonomic window on the Ediacaran. Within the Formation are found numerous carbonate compressions of organisms. This represents a different mode of preservation to that of the more typical sandstone preservation, at Miaho the forms are flattened carbonate compressions. Amongst the forms present are several that are interpreted as Beltanelliformis 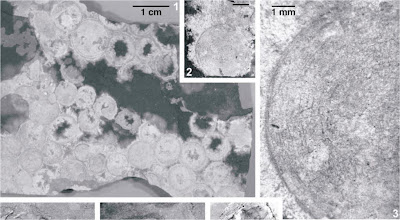 The non-overlapping nature of the fossils is a good indication that we are dealing with benthic (bottom-dwelling) forms and not free-swimming forms that have died and sunk to the bottom. It may well be that the forms were actually tethered to bottom with a small holdfast structure.

The Doushantuo specimens have thing flexible walls. However, given the original specimen at the beginning of this post, it's clear that they would need to retain the three-dimensional shape during burial by sand.

A modern form that appears to fit the bill is the caulerpalean green alga Derbesia (photo credit). 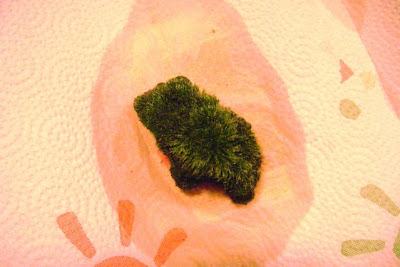 Derbesia is benthic, is attached by a minute holdfast, and has the right shape and size. Also, it is organized as a coenocytic film of cytoplasm within a elastic and strong wall and surrounding one or more large, fluid-filled vacuoles. These vacuoles would be sealed and so couldn't empty on burial like holdfasts could. This makes it strong enough to make an impression in sandstone preservation!

So Beltanelliformis has gone from Cnidarian -> holdfast -> anemone burrow -> algae with holdfast.

Interestingly, apart from Nimbia and Aspidella mentioned in a previous post, Beltanelliformis has one of the longest time ranges, having been found in the pre-Ediacaran Cryogenian in Canada.

This again raised the possibility that several of the generic Ediacaran disc fossils could be something other than metazoans. That's actually fine. We have enough evidence that some of the discs represent metazoans. That some don't, should be expected. After all, if the Ediacaran assemblages represent vibrant, healthy ecosystems, they would be expected to contain microbial, algal, and metazoan, life.
Posted by Chris Nedin at 1:39 PM