My last post on the possible 770 million year old Ediacaran fossils from Kazakhstan prompted some comments regarding epi- and hyporelief (go read the post and comments).

Basically, Ediacaran fossils are usually found on the underside of the sandstone bed in either positive relief (sticking out from the surface) or negative (sunk into the surface) hyporelief (hypo- is sciencey for 'on the underside'). This is dictated by the mode of preservation (again see the original post), and means that we do not find them on the top surface of the sandstone bed, or in epirelief. (Actually we do find them in epirelief, but only at Mistaken Point in Newfoundland where they have been mantled by volcanic ash - but that appears to be a one off and so does not represent normal preservation).

As an example here is a slab I collected from the Flinders Ranges in South Australia. First the upper (epi) surface. 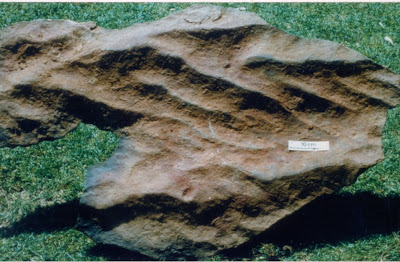 As you can see, its rippled - strongly rippled actually - which puts pay to the ideas that the Ediacaran faunas were deep water, but that's another story. However, what the top surface isn't, is fossiliferous. There are no fossils on it.

Now lets take a look at what's underneath. 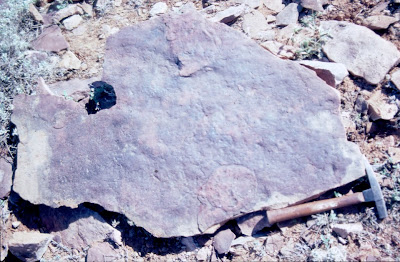 Ta Da! This was taken in situ, about 5 minutes after I'd found it. The photo is a bit blurry 'cos my hands were stili shaking!

Notice the smooth lower surface. This is because it is mantling a mud which does not form ripples. Also notice that there are three large discs in positive hyporelief and a Dickinsonia in negative hyporelief. What do you mean no!?. Ok, here's an annotated version. 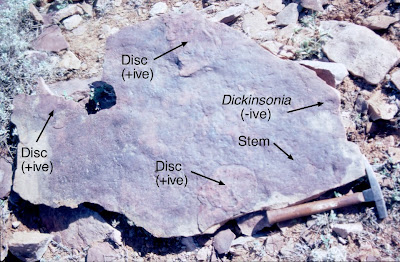 The question has been asked why the counterpart of a positive hyporelief isn't a negative epirelief on the bed below. In other words if the fossil is formed by sand flowing into a depression in the underlying mud to form a positive hyporelief, should there also be a corresponding negative epirelief on the top of the underlying bed?

The answer is yes, but we almost never find them. The reason is that the underlying bed is made of mud and so compresses during diagenesis which disrupts the fossil. However, the main reason is that the mudstone weathers much more readily than the sandstone and forms a very friable, crumbly rock that simply weathers away.

We do have some examples of underlying epirelief fossils, but they are very rare. To find them you have to excavate the sandstone with the underlying mudstone still in place. Even then, they are very fragile. Normally this never happens in nature as the mudstone erodes away. The fossiliferous sandstone then weathers out and falls downslope to be found by palaeontologists.

Below is a typical Ediacaran location. The fossils are eroding off the top of the hill and can just be seen in outcrop. but the fossils are found on the scree slope, as float - that is, material that has eroded out of the outcrop and has slid downslope 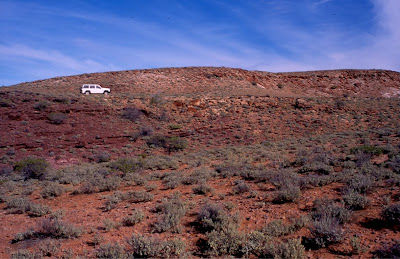 So the answer is, yes there are there epirelief fossils but we almost never find them as they have weathered away. But they would be in mudstones and not in sandstones.
Posted by Chris Nedin at 11:37 PM