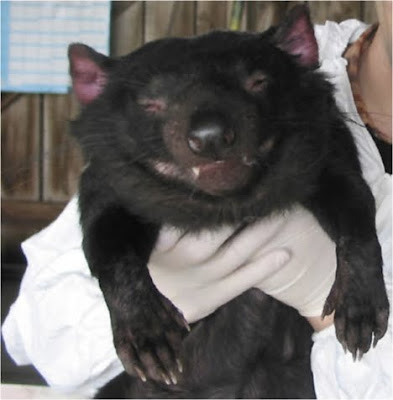 Cedric the Tasmanian Devil has been put down.

Cedric was at the forefront of research into the deadly Devil Facial Tumor Disease, which at last estimate was infecting 60 per cent of the wild devil population in Tasmania.

He made waves in 2007 when he was injected with a strain of DFTD and survived. He even survived a second strain with only a couple of minor tumours, which were removed.

Cedric had shown an immune response to the disease, and was otherwise healthy. It was hoped that he would lead researchers to a treatment or vaccine for the disease, but an X-ray last week showed a number of tumours in the lungs, and it was decided to euthanase the 6-year-old Cedric.

Donations to help the Tassie Devils can be made here.
Posted by Chris Nedin at 6:06 PM