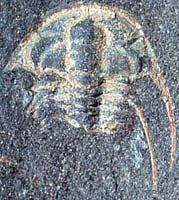 Drumming
You never forget your first. The time. The place. The moment.

The windswept coast. The bed that refused to cooperate. A cleavage that simply wouldn’t quit. But then suddenly, everything is revealed. The curves! So different. Stood out in the crowd despite being petite. I couldn’t fail to see, even at a distance of 4 feet.

No, you never forget your first. First meraspid that is.

This fellow is a personal favourite of mine. It’s a meraspid (or juvenile) Estaingia bilobata It was the first meraspid found at from the Emu Bay Shale. It’s a stage 10 meraspid. Thanks to it, and other merasipds found in the Emu Bay Shale, we can work out the ontogeny or growth pattern of Estaingia, and as an added bonus allows us to work out some evolutionary relationships (but that’s for another post).

This Palaeoporn is all about ontogeny amongst the trilobites, more specifically Estaingia.

One of the great things about trilobites is that, to grow, they have to moult the hard exoskeleton. This means that one trilobite can leave behind a complete growth history in moults. Since this is unlikely to happen for one, many trilobites of the same species leaving moults behind allows us to build up a picture of the growth pattern in a way that we simply can't do for moult-challenged organisms.

Meraspids are what trilobite larvae grow up to be before they grow up to be adult trilobites. Trilobite larvae, or protaspids look like just a head. Suddenly things get serious and the protaspid gets a tail. Or at least the beginnings of one. A furrow appears towards the back of the protaspid, which will separate the tail or pygidium from the head or cephalon. Once the furrow is complete, the trilobite is considered to have moved into the meraspid stage - meraspid 0. 0 because it has no thorax segments yet. Just a head and a tail.

Once in the meraspid stage, the trilobite begins to add segments to the thorax, usually one per moult, but in some species this can be more. Each meraspid degree or stage is represented by the addition of another thorasic segment and is numbered according to the number of segments. 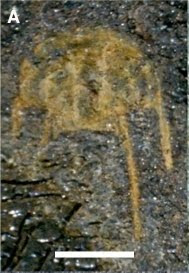 The specimen at right (Fig. A) is a Meraspid 1, the smallest meraspid so far found at Emu Bay.

The most striking thing (apart from it's size - the white scale bar represents 1 millimetre! Hence it's a bit blurry) is the spines. In very small forms spines become important. If meraspid 1 was swimming amongst the plankton, the spines would help with buoyancy, helping keep the meraspid afloat. If the meraspid was on the sea floor, then the spines would help keep the meraspid from sinking into the mud. We don't know if Estaingia meraspids were planktonic or scurried around on the sea floor. The spines may also provide some defense, but the get smaller as the meraspid grows so it doesn't appear that defense was a primary function. In meraspid 1 the one segment has a pair of large spines, as well as a pair of backward pointing spines on either side of the head. Meraspid 2 would have had two segments each with a pair of long spines. 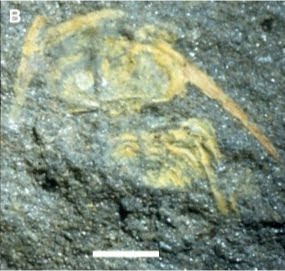 As the meraspid grows, segments are added from the front of the tail. We can see this in meraspid 7 at right (Fig. B, scale bar 1 mm). This has 7 segments, but the two original segments with the spines can be seen at the front of the thorax, with the non-spiney segments, which have been added later, positioned behind these two. If the thorasic segments were added from the back of the head, then the first two segments with spines would be at the back of the thorax next to the tail. The large spines on the head are also still very visible. 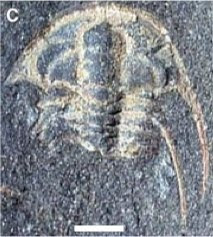 In Meraspid 10 at right (Fig. C, scale bar 1 mm) things are starting to change. The first thing to notice is that the large spine on segment 1 is almost gone. There is a much reduced spine there. Also the spines have become more curved. They are still long though - still the length of the meraspid. The head is very well preserved and provides a wealth of information on the way the various elements of the head change with growth. The rounded shape and the spines are very distinctive. Nothing else in the fauna is like that. So, even though it's only a few millimetres across, it immediately caught my eye. 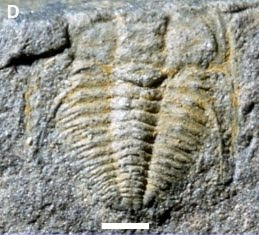 Finally we have meraspid 12 (Fig. D, scale bar 1 mm). We are almost at the Holaspid stage or mature stage, of 13 segments, and the meraspid is now similar to the final adult shape. Note that the second thorasic spines are much reduced, and the spines on the head are also beginning to reduce in length. The thorasic spines will completely disappear in the adult, and the spines on the head will be reduced, but still present. 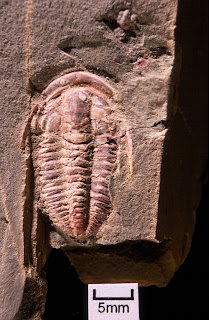 And this at right is a fully mature Estaingia. You can see that the thorasic spines have gone, and the spines on the head are much reduced.


Below is a diagrammatic representation of the ontogeny of Estaingia featuring the four meraspids figured above. 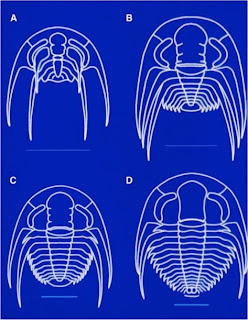 It gives you a better idea about what changes are occurring as the trilobite matures. Features to look out for are the relative width and length of the head and the glabella or central bulb region of the head. This is important because these relative values can be plotted and, as they remain at a constant ratio can help confirm the identification of the meraspids with the holaspid form. Like so:

As you can see the meraspid measurements (in red) line up along the same trend line as the adults (in blue) giving us a high degree of confidence that the meraspids are of Estaingia. Also notice that the measurements are clustered - i.e. not evenly distributed. This represents the moulting habit of the trilobites. As growth can only occur once the trilobite has moulted the pattern of growth is stepped. Unlike a constantly growing form, where the plot would be more even.

Using measurements of growth patterns can be very useful because with some trilobites, varying the time spent in particular growth patterns as can dramatically alter the end result - or what we call evolution. But that's for another post.
Posted by Chris Nedin at 9:48 PM