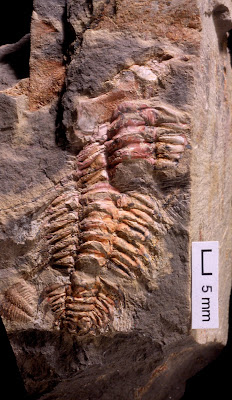 When you're broken, in a million little pieces . . .
You may want to check out Palaeoporn 14 and 15 before reading this as Palaeoporn 16 follows on from them. That's ok. We'll just talk amongst ourselves until you get back.

Oh, ok you're back. Right. First thing, you need to see this video of a giant spider crab moulting (hat tip PZ)


Once you've seen it and read PZ's piece on moulting, or ecdysis. The linked video of a spider crab moulting in PZ's piece is the one featured here. Very instructive, if not a little creepy. But remember that trilobites - being proper arthropods - exited the old body exoskeleton old school i.e. head first, not arse first like a common chelicerate.

Ok, now we have an idea of what ecdysis is, this Palaeoporn is an example of what happens when things go wrong . . . very wrong. 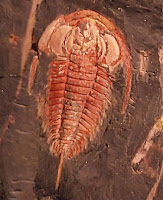 The photo at the top is of the trilobite Redlichia takooensis, or rather what's left of one after a particularly difficult mould. Just to remind you, at right is what a Redlichia takooensis should look like. R takooensis is a Lower Cambrian trilobite with a 15 segment thorax and small pygidium or tail. A major characteristic of R takooensis are the large spines, on either side of the head, at the back of the head in the centre, and two large spines on the axial rings of segments 6 and 11 (counting back from the head) (What? Axial ring. The middle part of the thorax. What? Thorax. The middle part of the animal between the head and the back end (pygidium). What? Yes the pygidium is very small, it's a micropygous trilobite. What? No. The division head-thorax-pygidium is not how the trilobite got it's name. The "three lobes" refers to the three zones of the thorax, the plura on the left, the axial ring, and the plura on the right).

There are probably spines on each axial ring, but 6 and 11 have the biggest. The spine coming off the rear of the trilobite, seen in the photo (above right), is from segment 11 - so the spines were pretty long.

To give an idea of what R. takooensis looked like I'm going to cheat an use another trilobite to approximate Redlichia.

Left side view of Paradoxides masquerading as Redlichia (it's got three extra segments - no, don't count them!). Thick line represents facial suture. (adapted from Whittington 1990)

Notice the spines. These will be very important in what happens in extreme ecdysis. In life, the spines would have not sat flat along the thorax, but would have been mobile and could be moved in an arc, from flat along the body (as above and in complete trilobite photo above right), through some acute angle (as seen in the ParaRedlichia diagram above).

What you don't see is the series on notches on the back margin of the first 5 segments of the thorax. These would have acted to lock the first 6 segments in place making this portion of the thorax act as a rigid body. That's also important.

What's also important is that the trilobite could bend. It could flex into an arc - though not into a ball like later trilobites (an important feature for Anomalocaris as discussed previously). Also the maximum flexure occured around segment 5.

OK, ecdysis in Redlichia. Normally Redlichia would have operated in a similar way to Paradoxides shown below. 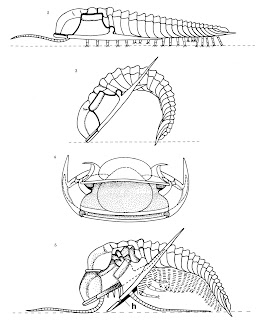 There is one difference (alright two). The spines. These could have been brought into play if the old exoskeleton didn't play ball, as shown below. 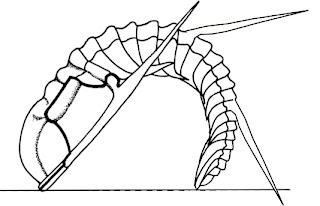 Here, the rear spine could have been used as a lever to apply more pressure on the head sutures, forcing them to separate and allow the trilobite to exit. How do we know this? well, a) it seems like a reasonable thing to do, and b) we have the specimen figured as Palaeoporn 16 (and others).

Let's remind ourselves of the specimen, 'cos its been a while.

What we have here is one disarticulated trilobite. There is a split in the thorax between segments 4 and 5, and another between segments 10 and 11. The thorax has been split into three pieces, comprising segments 1-4, 5-10, and 11-15 (plus pygidium).

Which brings us to a very important question. Where's the head?

The left free cheek is there, roughly where it should be at the front end, but it's inverted. It's inside out. Flipped over. The nice curved margin you can see is actually where it joined the eye. But the rest of the head?

To give you some idea, here is a somewhat stylised diagram to illustrate. 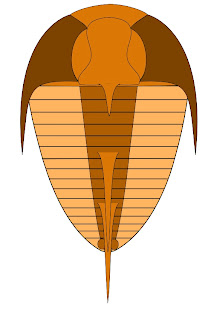 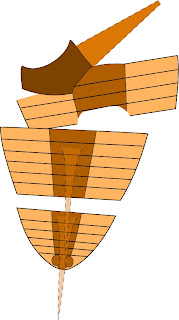 What we have is one very sad and sorry trilobite. But, knowing what we know of ecdysis in Redlichia we can piece (Ha!) together what happened.

So, the trilobite arched up, rammed the front of the head into the sediment and braced with the spine on segment 11. Nothing happened.

Eventually the arching and the bracing built up so much pressure that something had to give. In very quick succession, the exoskeleton behind the head went (we know this can happen from Palaeoporn 15), as did the sutures on the head. But also the pressure acting on segment 5 became too much and the exoskeleton ruptured between segments 4 and 5. Also to pressure around segment 11, caused by bracing against the spine, causes the exoskeleton to rupture between segments 10 and 11.

The trilobite exited the broken exoskeleton, probably taking the middle portion of the head with it. That left the free cheeks separated from the central head exoskeleton, but still attached to the doublure, which was buried in the sediment. The left free cheek, still attached on its outer side, rotated outward to lie inside out, while the other is buried. 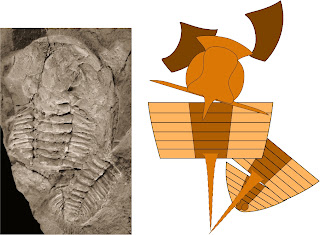 This time the thorax exoskeleton gave way behind segment 6 and behind segment 11. And this time we have the head. And both free cheeks, but they are inverted an displaced slightly. Also the doublure is present. it's the thick band right at the front of the head.