I previously discussed why I don't think the 2.1 Ga structures found in Gabon are multicellular colonial fossils.

Having looked at the Nature paper some more, another thing springs to mind.

Here are some of the structures as figured in the paper. 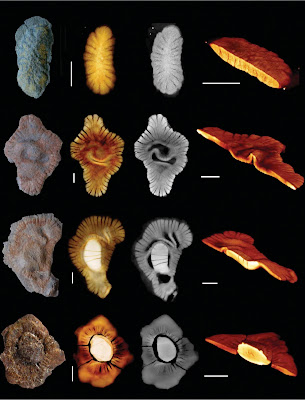 These things are small. Especially the central area that contains the folding.

Now, compare that with the examples of bubbles in microbial mats 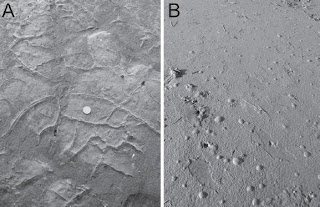 Photo from Cuadrado and Pazini (2007)
There is no scale, but some of the bubbles must be at least the size of the central folded area of the specimens figured in the Nature paper. This means we have structures documented today in microbial mats that equate in size to the central area of the structures from Gabon.

Now, what would happen to a gas or fluid filled bubble if it were covered with sediment and the gas/fluid escaped? It would deflate. Not deflate flat, as the microbial structure would be too thick. Maybe it would fold on itself just like the central structure in the specimen in row two above? Especially if there was an encouraging push from overlying sediment.

I'm even more convinced that the Gabon structures are microbial mats.