The Climate Change Research Centre at the University of New South Wales has been doing some interesting research. They have found a correlation between three of Australia's largest droughts (1895-1902, 1937-1945, and the present one, since 1995) and oceanic conditions - in the Indian ocean!

Say what? Shouldn't that be the Pacific and El Nino?

In a paper to be published in Geophysical Research Letters, the team have linked the last three major droughts in Australia with the Indian Ocean Dipole (IOD). 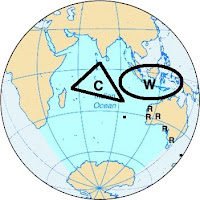 This is good, because it brings rain to western and southern Australia 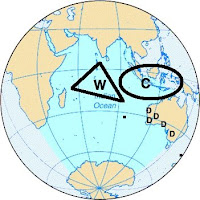 However, when things are reversed, with a warm body of water in the central Indian Ocean, and a cool body of water to the north east (a positive IOD), warm, moist air does not form.

This is bad because it results in drought to western and southern Australia.

The team has found that throughout the period 1995 to present, no -IODs have formed, and similarly -IODs were rare in previous times of extended drought.

What about El Nino? Well, we are actually in an El Nina at the moment, and there have been several in the last 12 years.

So it looks like there is a better fit with IOD than with El Nino/El Nina.
Posted by Chris Nedin at 7:56 PM