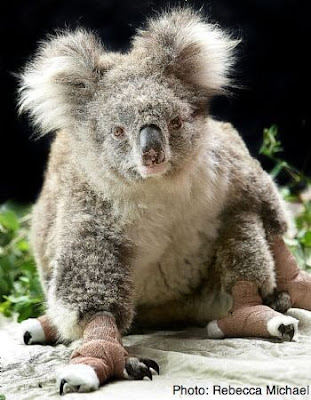 Sam (or rather Samantha as she is a female) has become famous thanks to the footage of her being helped by Country Fire Service officer David Tree in the aftermath of the deadly bushfires.

The CFS team had to leave shortly after the footage was taken to protect a house, but a few minutes later, Sam was picked up by wildlife carers and taken to the Mountain Ash Wildlife Shelter in Rawson, Victoria. There Sam has been treated with antibiotics and pain and burn relief medication.

Sam has even found a new friend, a male Koala also saved from the bushfires.

Meanwhile, pictures of Sam are being sold, with proceeds going to the CFS.