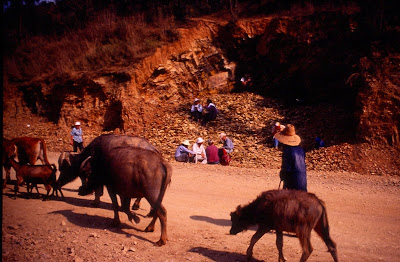 Ignore the cute baby buffalo. See that unprepossessing roadside quarry with the people sitting on a pile of rubble (click to enlarge)? Well that rubble is the type section for the Chengjiang fauna.

Yeah! Not so unprepossessing now, is it?!

The Chengjiang fauna occurs in the Maotianshan Shale, a member of the Lower Cambrian Chiungchussu formation. They are found about 5 km northwest of the Fuxian Lake, and 6 km northeast of Chengjiang, Yunnan, China.

The Chengjiang fauna rivals that of the Burgess Shale in preservation and diversity. Although not in difficulty to get to. The Burgess Shale is a 3 hour hike. Here, you can drive right to the outcrop! 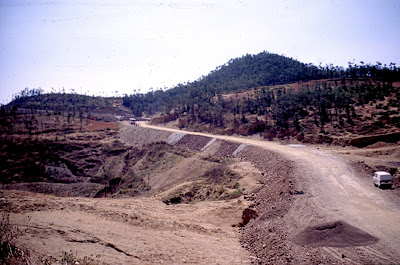 In this shot (click to enlarge) you can see the quarry from photo one in the middle distance. There is a bus parked next to it with some people in the road. The hill to the right is Maotian Mount (hence Maotianshan Shale) 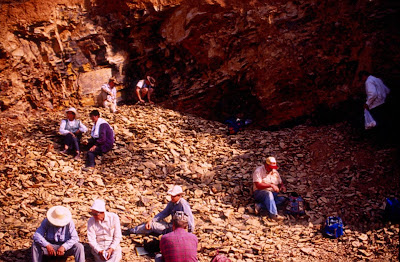 In this photo (click to enlarge), I am right at the back in short sleeves and a broad-brimmed brown hat (I'm in the same position in the first photo). I'm there partly because it's in the shade, and partly because there were some nice fossils there (all went to Nanjing University for study).

The depositional environment was delta front prograding eastwards into an open sea. Most of the fossil layers appear to be episodic events onto the marine muds in front of the delta, possible storm induced deposition of clays and fine sand. There's not much evidence of transport, so most organisms were locals and were buried by a series of turbidity flows. 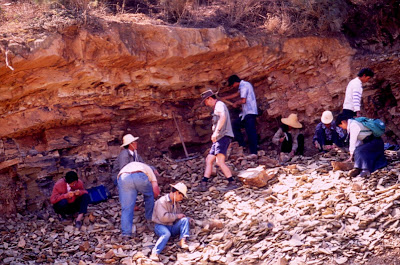