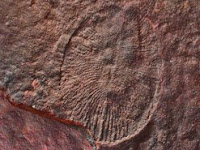 Summary, not a bad show all in all. Recommended if you are interested in the Ediacarans.
Posted by Chris Nedin at 9:47 PM