Show us some leg 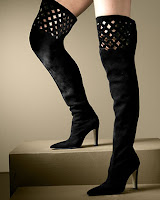 Now that I have your attention, I'd like to talk legs. No, not the Blahnik-clad ones opposite (a homage to the Goddess), but arthropod legs (sorry).

When I talked about the new reconstruction of the anomalocarid Hurdia from the Burgess Shale, I mentioned how it supported a particular interpretation of the evolution of the arthropod limb. Now I'd like to go into a bit more detail on this because it raises some interesting questions about what was going on down in the Cambrian, especially concerning arthropods.

Now the first thing to remember, is that in the Cambrian there were lots of almost-arthropod groups scurrying around and messing up a nice, neat, columbiformes-holed phylogenetic classification, in which arthropods were real arthropods, and ancestral and derived features knew their place. Biology is messy, especially in the Cambrian, deal with it.

Basically there were two groups - the Euarthropods, and everyone else. The Euarthropods are what we would consider to be the 'true' arthropods, with all the features we have decided can be used to classify them as arthopods (except where they have been secondarily lost, for what were probably very good reasons at the time) (we could go into symplesiomorphies, apomorphies, and all the other morphies, but frankly, that way lies madness, otherwise known as cladistics).

The groups outside the Euarthropods, such as the Megacheria, the Radiodonia, can either be considered as extremely interesting groups in their own right, with many of the features of 'true' arthropods, and have much to tell us about evolution in general, and arthropod evolution in particular - or as pathetic arthropod wannabes. Almost-arthropods that failed to make the grade.

My position is, I think, clear, Anomalocaris RULES.

Anyhow, back to legs (no, not the Blahniks - concentrate). Your bog standard arthropod leg is biramous. This means that it has two main components, the walking leg (the endopodite) and the frilly bit, which is the gill (the exopodite). (see diagram at right).

It was thought that the biramous limb is an ancestral condition, and was formed by the fusion of a separate walking limb with a frilly bit. So when we look at the other groups in the Cambrian what we see are separate limbs. Hurdia is a good example. The image at right is the gill structure found in Hurdia. A nice big gill-like structure, but no walking limbs. So Hurdia supports the idea that in groups ancestral to Euarthropods, the walking limb and gill were separate structures. All well and good.

However, work by Wolff and Scholtz1 has thrown some doubt on this neat idea.

They looked at the formation of both biramous and uniramous limbs in the crustacean Orchestia, which has both types.

The fossil record supports separate limbs for the pre-euarthropods, and I don't think the fusion theory is completely discredited yet. It could be that the fusion of both structures has linked their development to a large extent. But the findings are really interesting, and shows that we are still learning about early evolution during the Cambrian.

Biology! It's messy. It's complex. It's a harsh mistress. It's a scientific discipline in Blahnik boots.