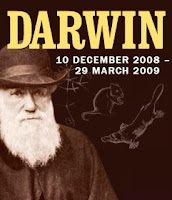 I've been meaning to blog this for a while, but have been too busy. I went to see the exhibition on Darwin at the National Museum of Australia, here in Canberra. It's good. It's very good!

The exhibits cover the world before Darwin, the young Darwin, the Beagle trip, the development of the theory, the theory and aftermath, and evolution today.

It's not large exhibition, but it does cram a fair amount in. The displays include writings, specimens, a mock up of Darwin's study, and AV displays - including three short films featuring evolutionary scientists such as Francisco Ayala, Francis Collins, Niles Eldredge, and Kenneth Miller. They also feature Genie Scott from the NCSE (join the NCSE today).

By far the most impressive pieces (and worth the price of admission on their own), are the writings of Darwin - notebook entries, manuscript pages and letters. Not copies, the real thing, pages, hand-written by Darwin himself. And not only from Darwin, there were letters from Hooker, FitzRoy, Wallace, and one from Huxley - that features the famous lines,

As for your doctrines I am prepared to go to the Stake if requisite... I trust you will not allow yourself to be in any way disgusted or annoyed by the considerable abuse & misrepresentation which unless I greatly mistake is in store for you... And as to the curs which will bark and yelp - you must recollect that some of your friends at any rate are endowed with an amount of combativeness which (though you have often & justly rebuked it) may stand you in good stead - I am sharpening up my claws and beak in readiness.

It's sad that, after 150 years, the curs still bark and yelp, but it's good to see that Darwin still has friends endowed with an amount of combativeness.

There were also family letters by Darwin, Emma Darwin, and Darwin's father.

The imagery and linkage they provoked was so palpable, it was almost like being in the room when they were written. I got positively goose-bumpy.

It's a good job it was in a plastic display case, because I think I was drooling à la Homer Simpson! To be so close to an image right out of the pages (literally) of science history!

The notebooks were amazingly small, no more that around 15 cms by 7 cms.

Interesting fact: Darwin wrote over 300 notebook pages on animals and plants, but over 1300 on geology.

One of the largest displays was a reconstruction of Darwin's study in Down House. This was very well done, and you almost expected Darwin to walk into the room at any moment! Quite poignant, was a shawl draped over the chair in the corner of the study. Late in life many images of Darwin have him wearing such a shawl.

This exhibit also had a brief description of Darwin's daily schedule, including his early morning walks around the Sandwalk - the walk behind Down House that Darwin used almost every day.

There was also a video of the Sandwalk, composed of still photos taken at 5 metre intervals all the way around the Sandwalk. So I took a stroll. I didn't see Larry Moran there though!

Interesting fact: only some 80 pages of the Origin manuscript survive. Darwin gave many of the manuscript pages to the children so that they could use the blank side to draw on!

The section on evolution today also carried the theme of controversy from when the Originfrom Cobb County Georgia,
Posted by Chris Nedin at 4:16 PM