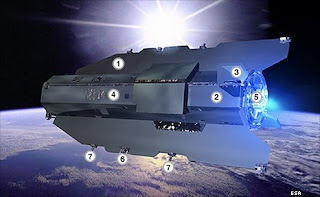 The European Space Agency's Gose satellite is due to be launched from the Plesetsk Cosmodrome in north-west Russia on Monday.

But just look at it!

It's what a space vehicle should look like. It's got an ion engine. It's even got FINS!

The Goce satellite will measure tiny variations in the pull of gravity experienced across the planet.

The fact that the Earth is not a perfect sphere, but is flattened at the poles, and as the composition of the Earth varies from place to place (varying the density), results in a variable density, which in turn varies the pull of gravity.

As the measurements are so small, Goce must fly very low, 270km, which means that it will interact with the slight atmosphere still present at that height. Hence the fins.

It also has a cool xenon ion propultion system to ensure smooth flight through the traces of amosphere.

NASA? Are you watching? Next time you put a sattelite up, at least shove some fins on it!

Full story at the BBC.

More info on Gose can be found on the European Space Agency site. Including this cool video.
Posted by Chris Nedin at 6:09 PM