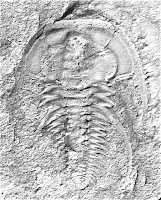 OK this one’s a bit of an indulgence. This is Megapharanaspis nedini a new genus and species of trilobite from the Lower Cambrian Emu Bay Shale in South Australia. It belongs to the Emuelloidea group of trilobite, a old group who’s members have lots of segments – considered an ancestral feature in trilobites.

It was collected by a team who worked on the site well after I had finished, so they named it after me!