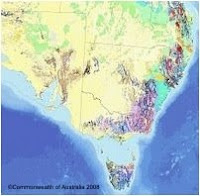 Geoscience Australia have released new digital surface geology map of the whole of Australia. The map is a 1:1 million scale database and provides, for the first time, a seamless representation of Australia's geology over the whole country.

Previously, Australia had been mapped in sections by State and Territory Government agencies. This has resulted in geological information that did not match up across juristictional boundaries, or even between areas within juristictions. This is because of different data acquisition methods used, and timing - where one block would be surveyed, and an adjacent block surveyed years later when the methodology or standards had changed. This resulted in a patchwork covereage that was not consistant.

The new map is now seamless across the country, and this will help resource and environmental managers to better understand and interpret regional geology.

The map is free to download (after registration).
Posted by Chris Nedin at 9:05 AM