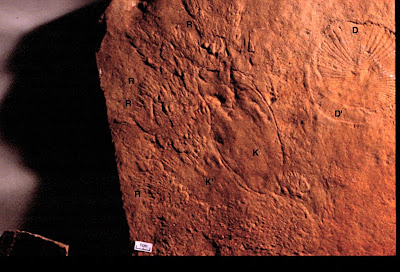 This is the Ediacaran form Kimberella quadrata, or rather traces of K. quadrata, from the Flinders Ranges of South Australia (click on the image to enlarge).

Kimberella is considered to be closely related to molluscs, primarily because of the specific trace fossil it is associated with, which are seen in this slab.

Kimberella has been reconstructed as a mollusc-like form with an oval shaped body including a non-mineralised outer shell, and a probosis-like feeding organ which contains a radula-like organ. Radulas are a distinctive trait of molluscs, and is a toothed organ for cutting and chewing food.

A radula leaves a distinctive trace fossil - Radulichnus, which is what the traces (marked "R") are interpreted to be on this slab.

This slab tells us quite a lot about the palaeoenvironment at the time of deposition. Remember that you are looking at the underside of a sand bed, which has mantled and moulded a preexisting surface, on which the animals were moving.

Kimberella itself is represented by another trace fossil. The mantling sand moved in from the 7.00 o'clock position and moved the Kimberella from it's original position K' (marked by a flat area representing where the flat 'foot' of Kimberella rested on the muddy surface) and pushed it into the mud and microbal mat at position "K". Note that the right hand side margin in slightly more distinct, meaning that it was pushed into the underlying mud more than the left hand side. The distinct line probably represents the edge of the non-mineralised shell covering the body.

Because Kimberella was quite a tall organism, the body appears to have then been lifted up by the current carrying the sand, and been removed.

The Dickinsonia (D) also shows signs of being moved from it's original resting postion (D') to it's final resting place, in the same direction as Kimberella. However, since Dickinsonia was flat and thin, the sand covered it, pushed it into the mud, and trapped it there. The fossil actually created a hollow in the base of the sand body indicating that the sand is not infilling a hollow in the underlying mud, but has been displaced by something sitting on and above the plane of the underlying mud.

If Kimberella is a protomollusc, this has implications for the possible presence of spiral determinate cleavage (oh goody I get to use "cleavage" in a Palaeoporn post), which has something to do with early development. PZ thinks this stuff is important so there must be something to it!

More information can be found here, and here - although the Berkeley site continues to call Ediacaran fossils "Vendian" fossils).