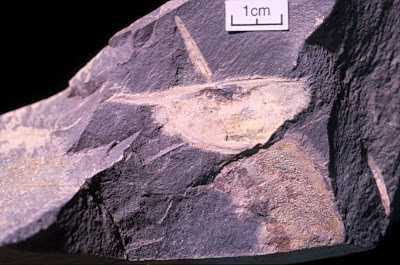 This is Isoxys communis a phyllocarid crustacean from the Lower Cambrian Emu Bay Shale, in South Australia. (click on the image to enlarge)

Isoxys is an arthropod with a curved bi-valved carapace, inside which the organism lives. In this case, all the organism lived within the cavity created by the carapace, except for the tips of the appendages, and, visible in the specimen above, eyes. This is the first occurrence of eyes in I communis, and allowed the correct orientation of the organism to be established. I communis has two spines along the top of the organism, pointing forwards and backwards. The backwards facing spine is longer that the forward facing spine, but the original reconstruction of I communis had the long spine facing forwards.

The specimen above shows two stalked eyes, and most of the organism, with the posterior missing. If you check the enlarged image, and follow the margin of the bi-valved carapace from behind the eyes downwards and around the bottom of the animal, the carapace ends at a fracture line. However a thin pink line in the matrix continues on backwards. This is the other valve of the carapace, showing the sediment filling most of the cavity between the bi-valves.

The forward spine on the specimen with eyes above is almost the correct size, just the tip is missing. The larger specimen lying directly beneath it is showing the posterior spine, it's much longer

Isoxys is quite common in the Emu Bay Shale fauna (there are parts of 4 specimens in the sample above), making up 13% of the fossils. The genus is also found in the Burgess Shale, and in the Chengjiang fauna in China, but they are whimps compared with I communis, which is up to 4 times bigger. Go Aussie!
Posted by Chris Nedin at 9:53 PM