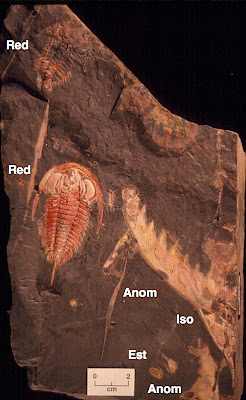 Just your average slab from the Lower Cambrian Emu Bay Shale (click on image to enlarge)! Well, not quite, but a very nice assemblage all in one spot.

First the big trilobite Redlichia takooensis (Red). Two specimens here, but the larger one is pretty much complete. It's a moult though. You can tell it's a moult because the suture lines on the head are disturbed. If you follow the outer margin of the head you will see some points where the edge is not smooth and there is a break, just like a little fault. These are the suture lines, which break to allow the cutilcle to break and the animal to exit through the head end.

This specimen also has a good example of a medial spine. That's the big pointy thing coming out of the back end. It actually attaches to the animal at segment 11 on the thorax (count back from segment 1 at the head end). There is also a spine coming off the head, dead in the middle of the back margin and overlapping the first segment.

The other trilobite common to the Emu Bay Shale is Estangia bilobata (Est), a much smaller trilobite, but actually more common.

The other critter, lying underneath the Anomalocars appendage, is Isoxys communis (Iso). Isoxys is a phyllocarid crustacean, which occurs occasionally in the sequence. They get quite big, with this one being around 5cm not including the spines. Elsewhere (e.g. the Burgess Shale) they are normally get up to 2-3cm.
Posted by Chris Nedin at 10:05 PM