The preservation of Myoscolex is striking. The grey material is calcium phosphate (apatite) and the red material is calcium carbonate (calcite) – in this case the calcite is just a light dusting over the apatite. The material preserved is muscle tissue – one of the earliest examples of phosphatised muscle tissue known. The colours actually pick out the two sets of muscles in the organism. The grey apatite highlights the longitudinal (along the body) muscle bands, while the red area highlights the dorso-ventral (top to bottom) muscle bands.

A number of factors, including the collection of more specimens with new information, and a better understanding of soft tissue fossilisation, resulted in a re-evaluation of Myoscolex as part of my work on the Emu Bay Shale.

It was found that Myoscolex is actually quite common, around 15% of all fossils found (trilobites were the most common at just over 50%), and that pretty much all the Myoscolex specimens found were in the same orientation - laterally flattened and straight (as in the first image). This was unusual in polychaetes, who tend to be found dorso-ventrally (top to bottom) flattened, and exhibit a greater range of flexibility.

A close analysis of the rod-like structures showed that they were paired, and extend out from the body itself. Not only that but they were preserved at different levels on the fossil. Check out the second image showing the rods. You can see the pairs, but one rod is missing, with only the imprint of where it was. This indicated that in the fossil, the pair of rods were lying at slightly different levels in the rock. In this instance, the missing rod was slightly higher in the rock and has separated with the upper part of the fossil when the rock split. The fact that the rods extended some distance from the body (as represented by the muscle tissue), and that they are not level, suggests that they have something to do with endoskeletal sternites, or the lower portion of the body segment. Which means that the animal must have come to rest on it's side and then been flattened so that the sternites folded up into a "U" shape with the lateral (outer) edges coming to rest close together like the top of the "U".

Except worms do not have sternites. Hmmm.

Then there was a breakthrough with this single specimen, which showed beautiful appendages. 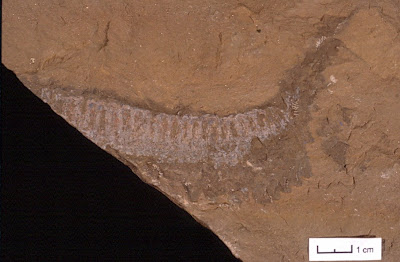 And they don't look like appendages any worm would have. They are paired and extend a considerable distance from the body of the animal. Plus the appendages differ in their orientation along the body, indicating that they were flexible. This find also explained why almost all the fossils were found in lateral aspect. The appendages would have come together under the animal upon death or burial, with lying on the side the most stable position. The appendages also showed a variation in attitude along the body, indicating a degree of independent flexibility.

This specimen also showed a portion of the tail, which pointed upwards.

These findings alone were enough to re-evaluate the animal, but a specimen with a head turned up, and things got weird. 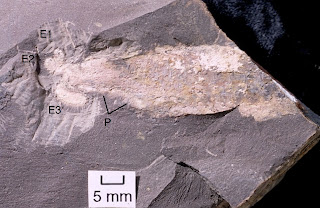 Nice eyes (E), shame about the number! Wait a minute, 3 eyes?! 3?! Yeah, and they aren't the same either. The two at the top in the specimen are sub-circular, but the one on the bottom is large elongate structure, which could be one long eye, or two or three that are overlapping ue to twisting of the head. The eyes are also preserved differently - as featureless films of fibrous calcite, not apatite, which indicated that there is no muscle tissue involved (as expected in eyes).

Not only that but there is a faint structure running backwards along the bottom of the head and start of the body (P). It's not well preserved, but is formed of apatite which means that it had contained muscle tissue, and is interpreted as a proboscis. Another specimen showing a possible proboscis is shown at right.

So what type of organism has more than two eyes, a proboscis, flappy paddle appendages, and an upwards pointing tail?

Well, the obvious candidate is Opabinia from the Middle Cambrian Burgess Shale. A check of the numerous reconstructions of Opabinia show that the same suite of characters are present, even the change in orientation of the paddle appendages along the body.