Will the real Cambrian Explosion please stand up 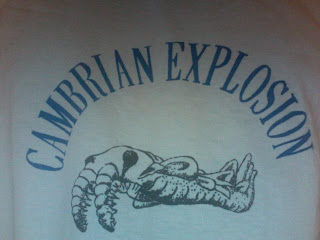 OK, now I’m really pissed! No, it’s got nothing to do with the bottle of fine South Australian Red I’m soothing my pent up frustration with. It’s another bloody antievolution ‘expert’ mangling the Cambrian Explosion. Again!

Cambrian Explosion One is the evolution and consolidation of a number of new body plans (disparity) which occurred over an extended period of time, and started well inside the Ediacaran. This was a true exploration of morphospace - groups boldly going where no group had gone before. Really.

Cambrian Explosion Two is the rapid expansion of the Cambrian fossil record. Which, while an evolutionary event, was primarily a biochemical event – namely the rapid take up of the idea that playing around with carbonate or phosphate mineralisation was right up the in the list of brilliant tactical maneuvers. Be it for digging burrows, chewing on everyone else, or stopping everyone else chewing on you. It was a diversification event – by comparison, exploring the local region of morphospace (boldly going where no group had gone before but within reasonable parameters, and we promise we’ll be back for dinner.)

Cambrian Explosion Two is to evolution what the microwave background radiation is to the Big Bang (kind of).

It’s the bit we get to play with after the major event.

So, the next time some antievolution 'expert' prattles on about the suddenness of Cambrian Explosion Two (and so Cambrian Explosion One was sudden), ask 'em WHICH Explosion they are on about, and do they now the difference between boldly going where no group has gone before, and swanning around the solar system?

Oh, and it’s a Wynns Coonawarra Cabernet Shiraz Merlot 2001. Thanks for asking.
Posted by Chris Nedin at 7:07 PM