It's not size, but form that counts. 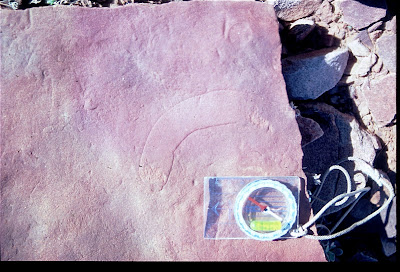 Look, I'm sorry about this. It's quite embarrassing, I know. But in my defense, I have blurred the naked Dickinsonia at the top right of the slab so as not to offend any sensibilities.

Anyhow, on to the real subject of this Palaeoporn, the structure with the highly descriptive and emotive name - "Form D". Yeah . . . "Form D" . . . no, honestly!

The Form D is the . . . um . . . rather flaccid structure above the compass. Form D was the name given to a group of thick, long, trace fossils of unknown origin. While they are not common, it doesn't take much poking about to expose them.

Given the lack of structure it was hard to attribute a source for the traces (they are not ribbed for example) thus making it difficult to erect a reasonable phylogeny and nomenclature. So they got stuck with the name "Form D" - as they were the fourth type of trace structures to be catagorised. Recently, they are thought to be, not trace fossils, but body parts. They appear to be association with the form Phyllozoon. 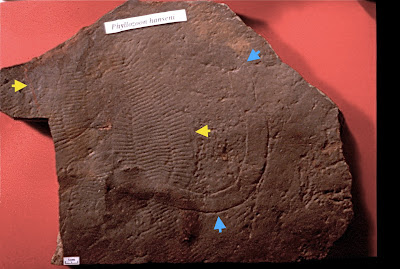 Phyllozoon Hanseni (yellow arrows) and Form D (blue arrows)
from the Ediacaran of Canada.
Phyllozoon is a more-or-less bisymmetrical leaf-shaped structure composed of a series of 'tubes' which meet at a central zigzag suture. There seems to have been only one layer of tubes forming the 'vanes' of the frond, with a stiff outer covering. Numerous individuals are commonly scattered over bedding planes, sometimes overlapping. The fronds have obvious polarity (top and bottom) and their common association with Form D is too frequent to be chance. It is possible that Form D is actually the stolon to which the Phyllozoon fronds were attached. They may well have looked something like this below, except Phyllozoon probably wasn't green. 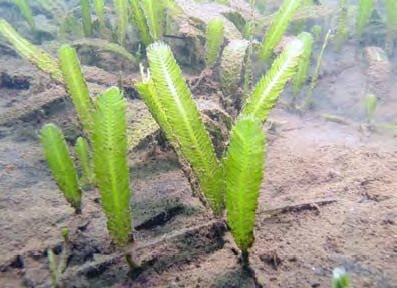 The alga Caulerpa taxifolia doing a passable imitation of Phyllozoon. Photo credit.
I suppose we should be grateful that Phyllozoon wasn't called Phallozoon . . .
Posted by Chris Nedin at 1:47 PM